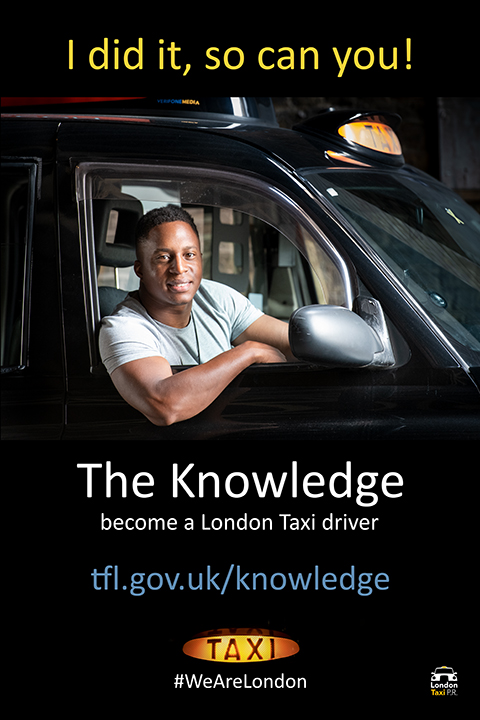 In conjunction with leading outdoor advertising company, London Lites, London Taxi PR has acquired the use of 31 digital billboard advertising screens across central London, for a period of 6 weeks from 19th March.

The advertising campaign features 5 London Taxi drivers, all of whom are from varying gender and ethnic minority backgrounds, with their images featuring alongside the tagline, ‘I did it, so can you’, along with a link to Transport for London’s website where information can be found on undertaking The Knowledge and signing up to begin the path to become a London Taxi driver.

Some of the screens have on average between 800,000 to 1m to a high of 8.8m fortnightly impact figures, excellent statistics and underline the engagement that can be expected during the campaign period.

“Given the effect of the pandemic on the profession, the drastic fall in student numbers on The Knowledge, and with many people within the profession expressing their concerns about its future, it was essential that we, (London Taxi PR) did something, both quickly and with maximum impact and coverage,” states Andy Scott, London Taxi PR’s, PR, and Communications spokesperson.

“The deal we have agreed with London Lites is a great one in terms of locations, visibility, and impact figures. What’s been reassuring is at the same time we have had a great response from businesses we have approached about our plans to promote the profession and further initiatives we have to help support The Knowledge and the students. We have to thank and pay tribute to all our supporters, drivers, and businesses, without whom this campaign would not be out on the streets.”

This latest campaign follows an extremely tough unprecedented 2-year period for the profession, which, due to the impact of the Covid-19 pandemic, has seen not only driver numbers fall considerably, but also a significant fall in Knowledge student numbers. All of which has had a massive impact on the current state of the profession and lead to increasing concerns about its future.

This new Knowledge incentive campaign follows the previous acclaimed success of ‘The Knowledge’ diversity initiative in 2018, where again the aim was to encourage more people to sign up to do ‘The Knowledge’ & become a London Taxi driver, by promoting signing up to The Knowledge. The campaign also highlighted that ‘The Knowledge’ is in fact inclusive and open to all, regardless of their gender, religion, or ethnicity.

Since their formation, London Taxi PR has undertaken a series of targeted media campaigns, which are being used to promote the benefits, advantages, and safety of using the iconic licensed London Taxi service to a wide audience.

All the campaigns and publicity that has so far been generated by the company has been funded by fellow London Taxi drivers and businesses within the profession, many of whom have signed up to donate to the cause on a monthly basis, indicating how passionate they all are about their industry and the cause.

London Taxi PR. Passionate about promoting and preserving the iconic London Taxi trade and funded by London Taxi drivers and businesses who care about their industry.