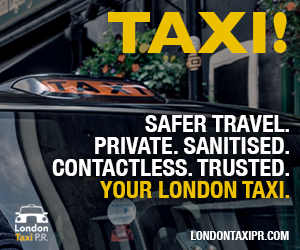 Our new 8-week online campaign kicked off on 8th June 2021 and was included within the Best of British Brands feature in The Standard newspaper.

This is the latest of 4 print & online campaigns we have produced since December 2020, which has included 3 advertorial inclusions in The Standard newspaper and one in The Daily Mail.

As part of the feature deal, we had an exclusive editorial piece and additionally 3 rotating and alternating banners (these link back to our website and are attached above). Once the 8- week campaign ended, the feature remains on The Standard newspaper’s website.

This was a fantastic opportunity for a great British icon, the London Taxi, to be featured for an extensive period within a feature devoted to promoting the Best of British brands, which we (LTPR), quite rightly, consider the London Taxi and the profession to be.

(NB: A breakdown on all the details regarding the coverage/reach etc., is included below.)

The article can be viewed via the link below:

This was an exclusive opportunity for London Taxi PR to work with the brand on an editorially approved “ Best of British” feature . The article will sit within a relevant section of the website and will be promoted across the site against relevant content.

As part of this offer, LTPR was included within the editorial approved feature and received: